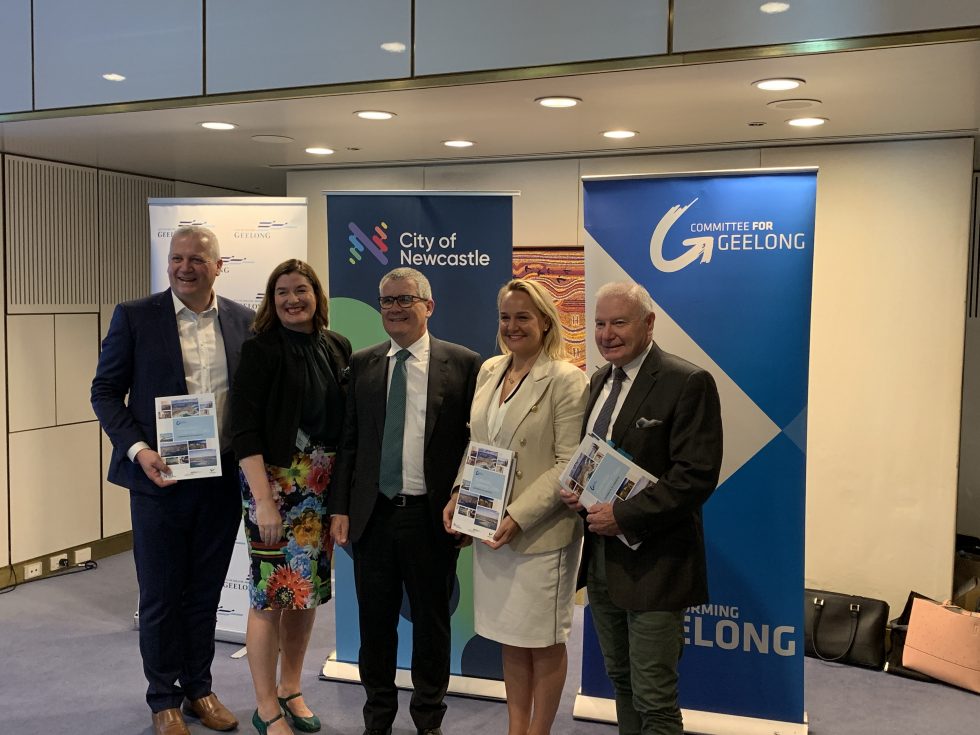 Increased population growth in the ‘Gateway Cities’ of Geelong, Wollongong and Newcastle will help ease population pressures facing Sydney and Melbourne as stated in a new report released today..

Published by the Committee for Geelong in partnership with the City of Newcastle, Wollongong City Council and the City of Greater Geelong, the ‘Australia’s Gateway Cities’ report was launched today at Parliament House by Federal Minister for Population, Cities and Urban Infrastructure, The Hon. Alan Tudge.

According to Committee for Geelong CEO Jennifer Cromarty, the criteria does not represent a claim to exclusivity as the only ‘Gateway Cities’ in Australia, rather it starts the conversation about the role of large cities to ease congestion challenges in Melbourne and Sydney.

“Australia’s Gateway Cities report highlights the shared and unique characteristics and strategic assets of the cities of Wollongong, Newcastle and Geelong. However, the report is not prescriptive in terms of these cities in isolation of a national approach to infrastructure investment or broader population policy. This report seeks to demonstrate certain assets and advantages of ‘Gateway Cities’ that can be deployed to maximise national economic growth, regional resilience and job creation for Australia’s long-term settlement strategy,” Ms Cromarty said.

The Report includes modeling to identify factors that show how ‘Gateway Cities’ can offer greater impact and benefits for investment, such as: Market Interconnectivity, Economic Pull and Retention, Economic Resilience and Transformative Capacity, Demonstrated Long Term Regional and National Economic Integration and Strength of the Revenue Base. The Australia’s Gateways to Growth report is available to download from www.committeeforgeelong.com.au/current-initatives

Lord Mayor of Wollongong City Council – Gordon Bradbery AM says, “Australia’s Gateway Cities: Gateways to Growth report is a significant start to mitigate our population pressures in Melbourne and Sydney and to create a model to enliven the regions.”

Mayor of the City of Greater Geelong Cr Stephanie Asher says, “this report follows on from a strong history of research by the Committee for Geelong regarding the role of large regional cities as a key contributor to our national economy and population growth plans.

Lord Mayor of City of Newcastle Cr Nuatali Nelmes says, “we now look forward to working together as foundation members of the Gateway Cities Alliance and having a collaborative and collective approach to progress next steps. Australia’s Gateway Cities occupy a significant place within the economy. However, they have been underestimated in terms of public policy.”